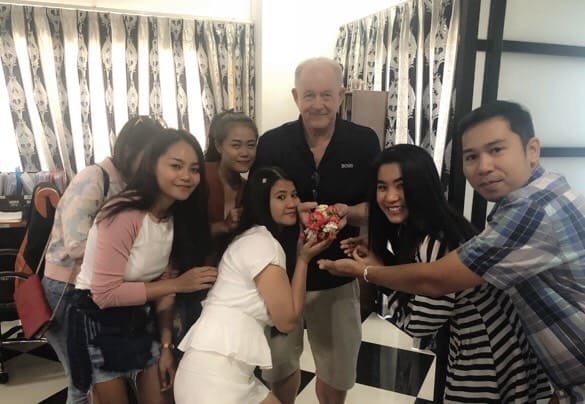 Monday saw all of our mail systems thai888.com down. We could receive emails but could not send as for an unknown reason. I called our domain hosting service Godaddy in Singapore. This did not help. It became its not our problem but they did try to help.

The second call was to TOT Thailand and some techs came out on Tuesday. A few hours later they showed me a screenshot of the Singapore server rejecting thai888.com emails.

Call back to Godaddy in the USA, where nearly an hour later I was getting angry as no sleep for a day and no email for 2 days.

Again Godaddy rejected that it could be their Singapore servers, although I had the screenshot of the servers rejecting thai888.com mail!

So we have Singapore, Thailand, USA and me being an Australian trying to solve the blame game with me in the middle saying I have to run a company and staff and clients emails aren’t getting through.

In the end, it was not a Godaddy issue according to them nor TOT issue and so.

In the end, I did something very radical. I moved (migrated) our thai888.com domain and all things to the USA.

6 hours later I got a messaging saying migration was completed. Then I reconfigured all the mail and certificates for SSL to show USA domain hosting.

Once things settle down I plan to make Abroad Funeral Thailand Website.

Don’t forget that Abroad Funeral Thailand is designed to take the worry and hassle from learning that a friend or family member has passed away in Thailand. What to do? where to start, who to call first? +66 8 0102 8978 do they speak English? Don’t waste time and just call us.

All is well now and so my apologies for any inconvenience –

My IT background saves the day

BTW my prior life I was the IT manager of Central Queensland University in Sydney NSW Australia and with this knowledge, I was able to fix this international issue. And so I hope something like this doesn’t happen to you as without technical knowledge it would be hard to diagnose the problem.

Lawyer, Living Will, Solicitor, Probate, Wills, Legal Advice, Funeral Director, Executor, Repatriation, by Thai888 – one company in control of all things to do with Will making going to Court, Embassy, Family & Friends, Beneficiaries, Repatriation, English and international experience. This is Jim from Australia with Thai888 law at the China embassy Bangkok. We were hired as Jim’s Chinese brother passed away in Thailand. Jim’s brother had a company in Thailand lived in Singapore and Shanghai. English Thai Chinese was used and 4 Embassies to get some vital docs we need to move ahead with probate in these countries. It will be a slow journey however Jim who lives in Australia is only a phone call away. Thai888.com info@thai888.com